Westbrook, MAINE – Republican gubernatorial candidate Shawn Moody’s campaign is in crisis clean-up mode following his comment that fire extinguishers are a “great deterrent” to school shootings, a remark that garnered widespread, embarrassing national media attention and was roundly rejected by both Republicans and Democrats. Struggling to personally defend himself and attempting to control the damage, Silent Shawn went into hiding and instead sent his campaign spokeswoman, Lauren LePage, back onto the radio to try to clean up his mess. However, LePage doubled-down on Moody’s less-than-comprehensive fire extinguisher plan (one day after calling it an “off-handed” remark) and pointed the finger of blame at everyone else but the candidate who made the comment.

“Moody is only months into his campaign, and he’s already imploding – further proof that he’s totally unprepared to be governor and isn’t up to the task of offering the serious, comprehensive policy proposals Maine needs,” said Phil Bartlett, Chairman of the Maine Democratic Party. “While he hides behind his spokeswoman and waits on his highly-paid D.C.-consultant to tell him what to do next, Mainers are looking for new, real leadership that they can be proud of – and Democrats are going to deliver. In the meantime, though, someone should hand Moody a fire extinguisher to help him put out the flames of his campaign.”

Silent Shawn got himself into this mess to begin with after facing a backlash from Maine people who were disappointed that he was the only gubernatorial candidate who refused to state his position on commonly-discussed gun safety reform efforts – likely the result of direct instructions from his highly-paid D.C.-consultant.

One prominent Republican took direct aim at Moody on his personal Facebook page, asking Silent Shawn why he ducked the newspaper’s questions. Moody responded by saying that the newspaper “wanted answers to their specific questions” and that he didn’t believe in responding to “questionnaires.” Moody then stumbled into a confusing rant about DARE, the program intended to keep kids off drugs, leading the Republican to ask “what’s the connection between DARE and gun rights?” The same Republican also asked direct questions about gun policy proposals – all of which, of course, went unanswered. The exchange is below: 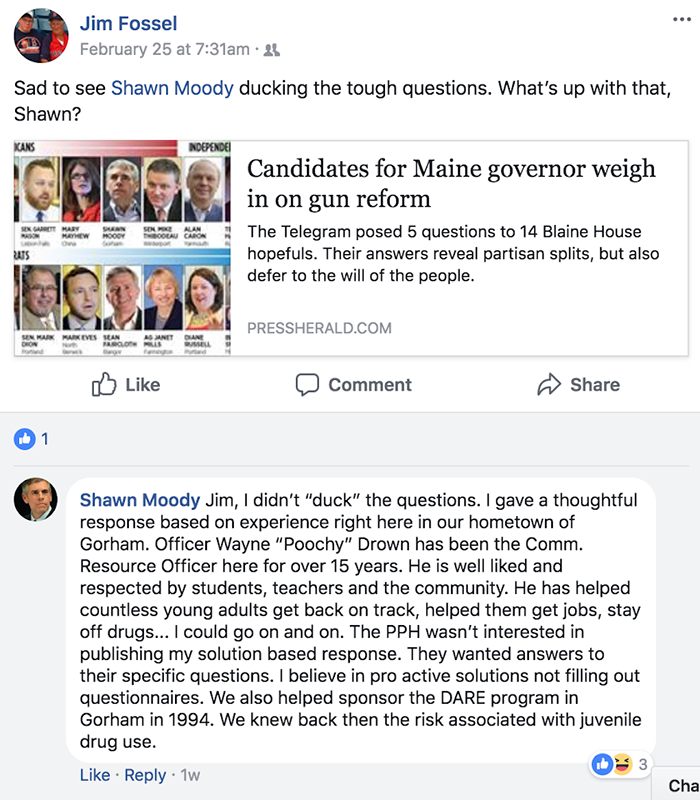 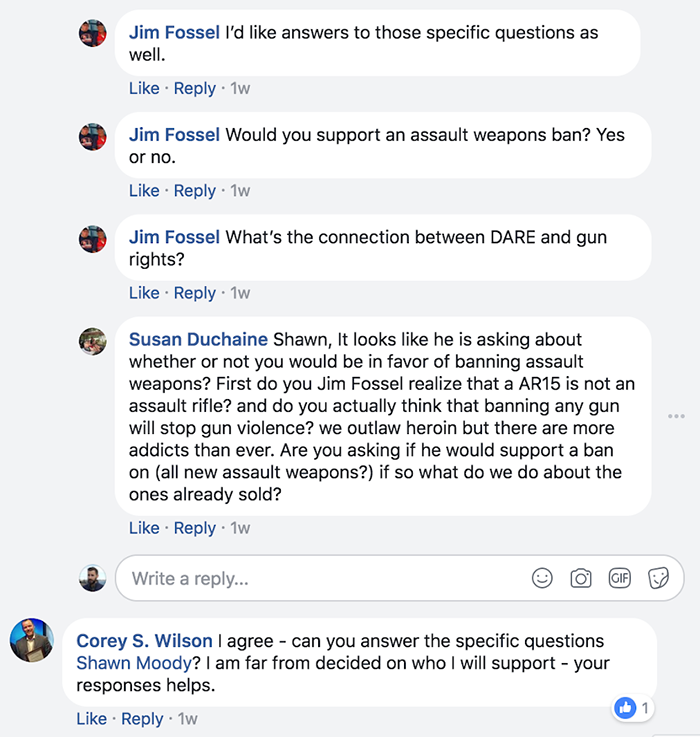